We add FPV and RC functionality to a LEGO Mindstorms EV3 vehicle with a PlayStation gamepad, USB webcams, a smartphone-based stereoscopic head-mounted display, and the alternative operating system ev3dev. 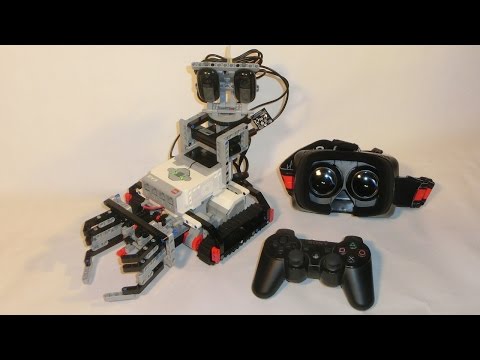 6.1. Using gcc on the EV3 brick
6.2. Customizing and recompiling the kernel

First Person View has become popular among RC enthusiasts. FPV is typically implemented with dedicated equipment such as PAL/NTSC analog video cameras, 2.4/5.8 GHz transmitters, and analog video goggles with built-in receivers. Such equipment can of course be mounted on a LEGO model. In this project, instead, we merge radio control and FPV functionality into the LEGO Mindstorms EV3 platform, leveraging its relatively powerful ARM9 system-on-chip, embedded Linux OS, USB capabilities and wireless connectivity. Digital video is received and displayed by a generic smartphone in a Google Cardboard-style headset.

As an illustration of the benefits of a fully digital and integrated system, we overlay telemetry data with just a few lines of Javascript code. In a legacy analog system this would typically require dedicated on-board hardware.

In the current implementation a Bluetooth gamepad connects directly to the EV3 brick, and MJPEG video from USB webcams is also transmitted over Bluetooth (HTTP/TCP/IP/BNEP) with adjustable trade-offs between image quality and frame rate. We discuss ways to improve range, latency and video quality.

As virtual reality applications become mainstream, medical authorities worldwide are developing guidelines for the safe use of immersive displays. See for example: https://www.oculus.com/warnings/.

These recommendations are not to be taken lightly. Low-quality, DIY or poorly configured head-mounted stereoscopic displays can exercise human binocular vision in ways that are completely unnatural, leading to long-lasting discomfort or even injury.

Children under 13 and anyone with impaired vision can still enjoy FPV on regular (non immersive) displays.

Most USB webcams are supported under Linux nowadays, but many chipsets are not publicly documented and their Linux driver are based on partial reverse-engineering of Windows drivers. Thus, we favour webcams which comply with the USB video device class (UVC) standard. Here is a list of common UVC webcams.

This project requires a webcam with built-in compression; we do not want to process raw video on the EV3 CPU. Inexpensive MJPEG webcams are now available, and it is easy to decode and display MJPEG streams in a web browser.

The webcam should be backward-compatible with USB 1.1, as the Host port on the side of the EV3 brick does not support USB 2.0.

FPV can be as simple as looking at a video feed on a tablet or smartphone, but a head-mounted display improves the feeling of immersion. While a monoscopic head mount (with left and right screens showing the same image) is sufficient for aerial imagery, a stereoscopic view is definitely useful when driving a ground vehicle in a cluttered environment.

The device must support IP networking over Bluetooth, also known as BNEP or PAN or simply "Internet access" in the Bluetooth settings menu.

brickrc is a successor to [BRICKHID] with support for the motor drivers of ev3dev (/sys/class/tacho-motor/*).

Video is simply rendered as JPEG images in a web browser. Javascript code receives images from the EV3 brick over HTTP. CSS transforms rotate and scale the images to account for various camera mounting options.

The PlayStation gamepads require a special pairing procedure over USB before they can be used wirelessly. See [SIXLINUX] for background information.

We use ev3dev-jessie-2014-12-01, apparently the first release with user-friendly IP networking over Bluetooth.

On Linux, installation boils down to flashing a microSD card (1 GB or more):

Once we have a root shell, we can install a few useful packages:

Using e.g. vi or nano, edit /etc/systemd/system/bluetooth.service to change the ExecStart line to:

Then restart the Bluetooth subsystem: with the new configuration:

Unplug the gamepad and press its PS button. The four LEDs will flash briefly, then one will turn solid red. At this point the gamepad controls the motors.

To start brickfpv automatically when the EV3 brick is powered up:

brickfpv will automatically pair any gamepad found on the USB bus when it starts. Plug the gamepad, turn the brick on, then wait at least until the LED turns solid green and the LCD shows the brickman menu before unplugging.

Look for error messages in /tmp/brickfpv.log.

Stop any lingering component of brickfpv:

then watch for messages when the PS button is pressed.

Check whether the gamepad tries to establish a Bluetooth connection:

Run the video server manually from the command-line:

Alternatively, small programs (such as brickfpv) can be compiled directly on the EV3 brick.

ev3dev ships with compilers and interpreters for several exotic languages, but not for C. So we free some space and install gcc:

6.2.  Customizing and recompiling the kernel

The ev3dev kernel configuration lacks a few features which might benefit this project. To enable them, the kernel (or at least certain loadable modules) must be recompiled.

Again, we can compile the whole Linux kernel on the EV3 brick. The initial build takes some time, but then individual drivers can be patched, recompiled and tested reasonably quickly. The only difficulty is that RAM is too small, so we add swap (requires a microSD card larger than 1 GB):

As described above, brickfpv merely replicates (and poorly so) the functionality of dedicated RC and FPV systems. However, having integrated all these functions digitally on a single computer, we can do much more:

For proper stereoscopic viewing, image pairs must be aligned to within a few pixels. Therefore we have to orient the cameras very carefully. Alternatively, cameras can be calibrated and images can be reprojected in software. This process is known as image rectification. Implementations can be found e.g. in [OPENCV]. It might be possible to perform reprojection in real-time on the GPU of a modern smartphone, and even compensate for HMD lens distortion in the same rendering pass.

Trying to stream from two /dev/video devices simultaneously on Linux often fails with ENOSPC (not enough bandwidth). This happens even on USB 2.0, regardless of resolution, frame rate and compression.

For compressed formats, there is currently no simple workaround. This discussion provides a patch. Note that this requires recompiling the uvc_video kernel module.

USB webcams with built-in H.264 compression are now available. On the one hand, H.264 is more efficient than MJPEG, and it handles not only video but also audio. On the other hand, H.264 decoders in smartphones tend to be proprietary and it is unclear whether two synchronized left/right streams could be displayed side by side easily.

8.5.  Using WiFi instead of Bluetooth

Range could be extended by streaming video over WiFi instead of Bluetooth. Even with two webcams and a WiFi adapter all connected to the USB 1.1 port, bandwidth might be better than in the current implementation.

The Bluetooth joystick would connect to an app running on the smartphone, and commands would be relayed to the EV3 brick over WiFi.

With an app running on the smartphone, it would be easy to pan the camera turret in response to rotation or tilt of the HMD.