We show how to interface LEGO Mindstorms EV3 directly with off-the-shelf Bluetooth gamepads and joysticks such as the PS3 SIXAXIS and DualShock 3 controllers. 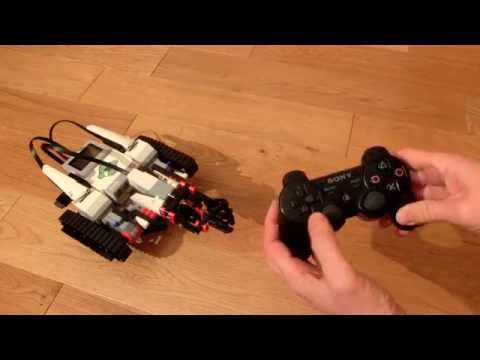 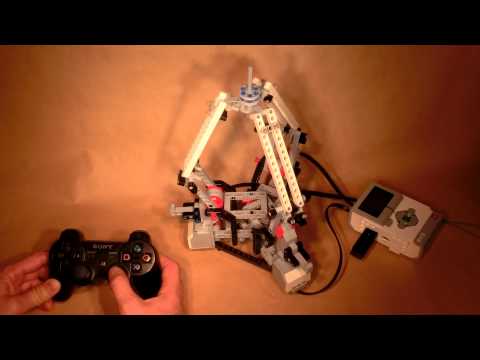 The LEGO Mindstorms EV3 platform brings significant enhancements in CPU power, programmability and connectivity over the previous generation, Mindstorms NXT. Actually, there are so many new features that some of them are not fully exploited out-of-the-box. In particular, the EV3 brick contains a generic Bluetooth protocol stack, but it only uses it to communicate with Mindstorms software over a dedicated protocol .

In this project we show that a small C program running on the EV3, brickhid, can handle Bluetooth communications with a PlayStation 3 controller and translate stick positions and button presses into motor commands.

Others have already demonstrated the use of Bluetooth and USB gamepads with Mindstorms EV3 and NXT, but usually with proxy software running on a third device (PC, laptop, tablet or single-board computer). Here we establish a direct Bluetooth connection between the gamepad and the EV3 brick.

More generally, this project suggests that the EV3 brick can interact with a variety of Bluetooth devices, even without replacing the stock firmware:

Note .  A better way to take advantage of all the features of the EV3 platform is to install an alternative operating system such as EV3DEV. See for example [BRICKFPV].

The tracked vehicle in the demo video is the standard TRACK3R model from the Mindstorms EV3 base set (31313313133131331313), except that the programmable brick has been shifted to expose the USB Host port.

Positioning accuracy is disappointing (at least by delta robot standards), even though care has been taken to make the chassis very rigid with three layers of beams and rectangular frames interlocking at 120°. Still, this model is a good introduction to parallel robot kinematics. For better accuracy, gear reduction and pre-tensioning should be considered.

Second-hand units should be massively available and inexpensive in the next few years as newer gaming consoles reach the market.

It might be possible to run programs from a microSD card containing a customized firmware, but we have not investigated this approach.

A generic Linux PC with an ARM cross-compilation toolchain is recommended to compile brickhid, access the EV3 command-line, transfer files, pair the Bluetooth gamepad and start the program.

Users without a cross-compilation toolchain can either use our pre-compiled brickhid binary, or compile and run brickhid on a PC rather than on the EV3 brick. Communications with the Mindstorms runtime will take place over WiFi rather than over the loopback interface.

This project does not use the Mindstorms graphical programming environment for Windows/OSX.

The EV3 brick runs a generic embedded Linux OS on an ARM SoC.

The platform has only 64 MB of RAM, most of which is already used by the filesystem image (cramfs), the operating system, the Mindstorms runtime, and EV3 user programs (loaded in a ramdisk). The Mindstorms runtime process consumes about 50% of CPU power when idle. So brickhid must be kept as lean and efficient as possible. Hence the decision to use the C programming language.

The Bluetooth standard specifies "profiles", which are essentially dedicated protocols for various types of devices. For keyboards, mice and gamepads, the relevant profile is called HIDP (Human Interface Device Profile). HIDP is supported on most Linux distributions, which is why Bluetooth keyboards and mice usually work out-of-the-box. The Linux kernel also has an interface called HIDRAW which allows applications to access more exotic HID devices such as game controllers.

Unfortunately the Linux kernel in the stock EV3 firmware has been compiled without support for HIDP and HIDRAW, presumably to save memory. The following procedure can be used to check whether this situation changes in future releases:

As a consequence, brickhid must interface with the Bluetooth stack at a lower layer, namely L2CAP. brickhid creates Bluetooth L2CAP sockets and accepts connections on PSMs 17 and 19 which are allocated to HIDP.

brickhid does not implement the full HID specification. The current version has hard-coded support for the message format of the PS3 gamepad. But it is very easy to add decoders for other HID devices.

brickhid does not control the motor drivers directly. Rather, it sends EV3 bytecodes (such as motor commands) to the Mindstorms runtime, lms2012. This is done over a loopback TCP connection, with the same EV3 protocol that is used over WiFi.

The EV3 protocol specifies a command for setting the angular position of a motor, but it is apparently not implemented. So brickhid implements a simple servo loop using the commands OUTPUT_GET_COUNT and OUTPUT_SPEED. This causes noticeable latency and overshoot in the delta robot demo.

On start-up brickhid reads a configuration file which specifies how buttons presses and stick positions should be converted into motor commands.

4.3.  Pairing the Bluetooth gamepad with the EV3 brick

For more information about this procedure, see [SIXLINUX].