Seeing the world through a depth-sensing camera

In this project we attach a depth-sensing camera to a head-mounted stereoscopic display (think: Kinect + Google Cardboard). The resulting portable device allows users to see their surroundings in unusual ways. 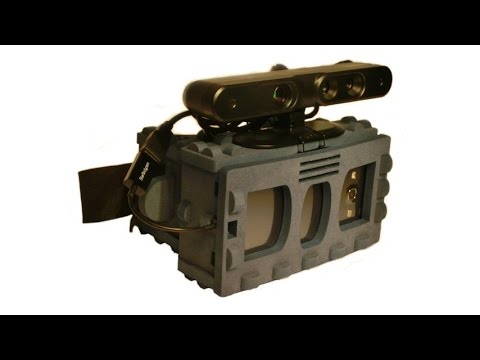 Is virtual reality finally coming of age, after decades of false starts and unmet expectations ? It is too early to tell, but there has certainly been exciting progress since we last investigated this topic in 2009 with [WXHMD]: Kinect, Google Glass, Oculus Rift, Google Cardboard, etc.

In this project we combine two technologies which have recently become affordable: depth-sensing cameras, and smartphone-based head-mounted displays. A Kinect-like depth-sensing camera is connected to the USB OTG port of an Android phone. Depth information is rendered stereoscopically with low latency. Possible rendering modes include:

Others have already used head-mounted cameras and displays, tethered to powerful computers, for purposes such as 3D modelling and motion tracking. Here we focus instead on low cost, portability and freedom of movement to provide an entertaining user experience. This is "alternate" reality rather than "virtual" or "augmented" reality.

This project begins with the realization that smartphones are now powerful enough to act as USB hosts for peripherals designed for desktop PCs, and simultaneously render real-time 3D graphics. Our implementation consists of:

We selected the ASUS Xtion (instead of the Kinect) for its small size and plain USB connector. It is quite surprising that the Galaxy S3 is able to power it, as USB OTG is typically intended for low-power devices such as USB flash drives. The Xtion draws 300 mA in our application (streaming depth data at 160x120x30fps, no audio processing, no RGB video streaming).

Note: There are reports that the ASUS Xtion does not work well with USB 3.0, and that this can be worked around on Linux PCs by downgrading ports to USB 2.0 (ehci). Unfortunately this is not so easy to do on Android devices.

There are also a number of short-range depth camera which are intended primarily for gesture recognition. Note that unlike the Kinect, some of these cameras do not perform the stereo correlation work in hardware.

To increase battery life, the camera can be powered externally through a USB Accessory Charging Adapter (ACA).

The Galaxy S3 performs well, but individual pixels are clearly visible at 1280x720 and the relatively small screen restricts the field of view.

Of all these devices, only the Galaxy Note 3 has a USB 3.0 port (presumably required for Kinect v2).

Note that our proof-of-concept software requires a rooted device for direct access to USB peripherals.

Google Cardboard brought smartphone-based head-mounted stereoscopic displays to the mainstream, but there are many alternatives, some of which predate Cardboard.

The main criteria are:

It is easy to ruin a user's first VR experience with an improperly configured head-mounted display. Thus, it is a bit shocking that so many side-by-side stereoscopic software applications do not allow some crucial parameters to be adjusted.

At the very least, the following distances should match:

Further, the focal length of the 3D projection should match that of the head mount, especially if motion tracking is used. This boils down to adjusting a 2D software scaling factor.

Finally, geometric distortion near the edges of the field of view should be corrected in software.

The ASUS Xtion is supported by OpenNI2, which can be easily cross-compiled for Android.

This quirk-and-dirty patch adds a few lines of C++ code to OpenNI2/Samples/SimpleRead/main.cpp so that the SimpleRead demo renders stereoscopic point clouds directly to /dev/graphics/fb0. It is only intended as a proof-of-concept and a way for others to get started. It is known to work on the Galaxy S3 with Android 4.3 (rooted).

Ideally this project should be converted into a regular Android app for non-rooted devices. Preliminary analysis suggests that it might be possible.