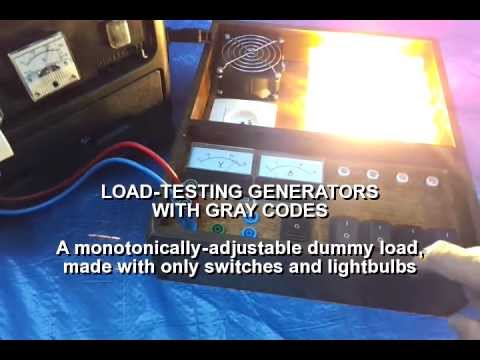 For the purpose of testing electric generators it is convenient to have dummy loads or load banks that draw a known amount of power. Ideally, a dummy load should be adjustable continuously while in use, to permit testing how the generator reacts to load variations.

Wire-wound rheostats are typically used for this purpose, but kilowatt-scale units are expensive specialty products. For example, one of our online suppliers lists a 600 W unit at 110 EUR.

Liquid rheostats are easy to build and can scale to hundreds of kilowatts, but they require significant maintenance, calibration and safety precautions.

Instead, we will build a dummy load from inexpensive household parts, namely toggle switches and incandescent light bulbs. Dissipated power will be adjustable from 0 to 1500 W in 16 steps of 100 W.

Any number of fixed loads, connected in parallel, will produce an arbitrary equivalent load, as in Figure 1, “ Naive adjustable load ”, but there must be a smarter solution.

Binary codes immediately comes to mind as a way to reduce component count.

Unfortunately, with binary coding, the load cannot be adjusted monotonically. For example, to increase the load from 700 W to 800 W, we need to change the switch settings from OFF-ON-ON-ON (0111) to ON-OFF-OFF-OFF (1000) - one switch at a time. Whatever order we choose, at some point we will toggle S3, and the load will suddenly increase by 800 W. Such large load variations may cause some generators to stall; other may deliberately shut down rather than supply non-compliant voltage or frequency.

What we need is a circuit such that only one switch needs to be toggled to increase or decrease the load by one step. Fortunately this problem was solved a long time ago, and the canonical solution is Gray codes. In a Gray code, the Hamming distance between consecutive code words is always 1.

The simple circuit in Figure 3, “ 4-bit Gray-coded adjustable load ” implements this idea. It can be seen as a combined Gray-to-binary-to-analog converter with resistive output. Incidentally, the light bulbs display the value converted to binary.

The circuit is actually four chained copies of the basic cell shown in Figure 4, “ Basic cell; equivalent circuits for S=0 and S=1 ”, minus a few unconnected components. Each cell is a polarity reverser controlled by one bit of the Gray-coded input, plus a fixed load. The polarity reversal is reminiscent of the algorithm for converting Gray codes to binary where code words are read from left to right and subsequent digits are inverted when a "1" is an encountered.

After simplifying the layout as in Figure 5, “ Equivalent circuit for Gray code word 0101 (decimal: 6) ”, we see that the device actually has three terminals, although we only use it as a two-terminal variable conductance here.

A suitable shielding window must be added to protect against fires, burns, harmful ultraviolet radiation and exploding tubes.

Thanks to "rj" for mentioning the high inrush current of incandescent light bulbs.